The library gravy needs to be installed from source on GitHub; open the version of R you are using in JUICE, and copy the following (you may need to additionally also install Rtools.exe on your computer):

Determination of species response on studied gradient represents one of the basic tasks in ecology. Response curve allows estimation of species optimum and also niche width (tolerance), identifying species as generalist or specialist. Most of widely used statistical methods assume that species response on gradient have symmetrical bell shape of Gaussian curve, even if number of studies showed that this type of response occurs in real data quite rarely. Several methods dealing with problem of modeling of asymmetric species response curves were discussed in study of Oksanen & Minchin (2002a), which was together with detailed technical description in Oksanen & Minchin (2002b) taken as the base for routine built in the JUICE software and calculated in externally running R package software.

Methods for modeling response curves available in JUICE include:

Bell-shaped curve is included mainly for reference, to show what the response shape would look like if using Gaussian model. Other three options allow quite flexible expression of different response curve shapes, each having different constrains, advantages and disadvantages. GLM models offer curves, which are completely described by equation with given number of parameters; however, the shape of its response curve is quite often somehow inappropriate or unrealistic. The GAM models are more flexible in terms of curves' shape, but their equation is non-parametric and not easily expressible. Perhaps the best option from ecological point of view is using HOF models, which are designed with stress to demands one would expect from species response curves - for example, they express only unimodal response shape, which is usually the most appropriate way when searching for species optimum on gradient (GLM and GAM with low number of degrees of polynom or freedom, respectively, can't really produce bimodal response shape, but can easily produce 'semi-bimodal' shape with inexplicit interpretation - see Fig. 3).

Available information about species is reduced only to presence-absence, even if all methods can handle also percentage or somehow transformed data. It has two reasons - first, resulting curves from presence-absence data are more 'pretty', with shapes giving more straightforward interpretation. Second, removal of information about dominance from species data makes the interpretation of resulting response curve more clear. Information about species abundance (or cover, respectively) is affected by complex factors, including competitive relations, species morphology and other biotic aspects, which all together doesn't need to be easily interpretable; on the other hand, these factors are at least partly removed, when the presence-absence transformation is used (Austin, 2002).

As any model, also response curves are just simplification of reality and their shape is strongly dependent on available dataset. One of the main assumption, which doesn't need to meet reality, is the unimodal type of species response - means that species has only one optimum along tested gradient. Even if bimodal response of species could have interesting and meaningful interpretation, it's somehow tricky in terms of determination of optimum and species tolerance, and needs to be evaluated individually for particular species. Therefore, only unimodal or monotone response of species is considered here.

How species optimum and tolerance are calculated

Optimum is simply the value of gradient, where the species has the highest probability of occurrence based on particular model. If the response curve shows monotone growing, the optimum of species is identical with lowest or highest value of gradient. In case of HOF models, where flat segments of curve can occur (model I and III), optimum is localized in the middle of this flat segments (in case of model I, optimum is simply the middle-point of available gradient values). Tolerance is determined similar to the method used in Schröder et al. (2005) - it is represented by that part of gradient, where predicted probability of species occurrence is higher than half of maximum value for predicted probability.

How to run this function from JUICE

Operating the function in R 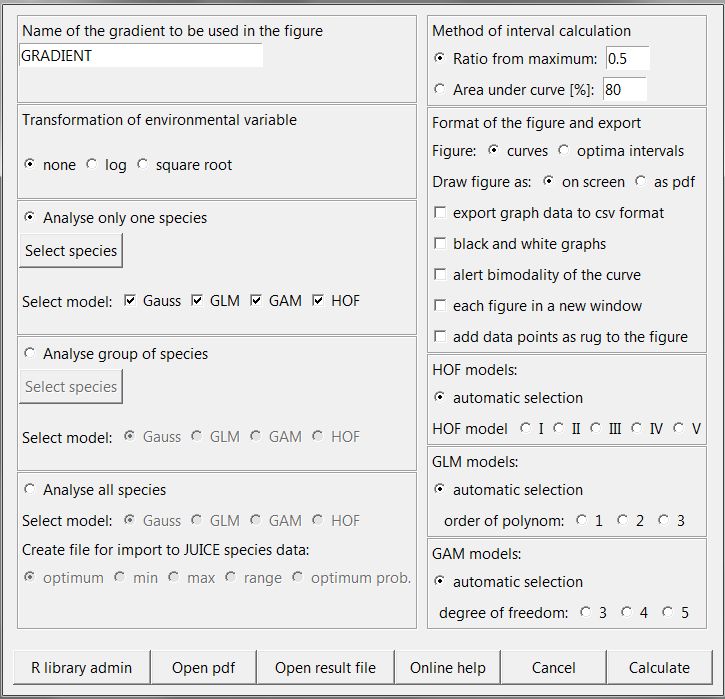