In January 2015 this website has been moved from http://www.sci.muni.cz/botany/zeleny/wiki/juice-r to http://davidzeleny.net/juice-r ! 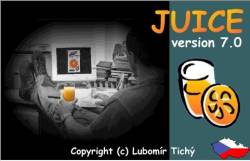