How to use it

MoPeT is based on R program - you need to have R installed on your computer, but you don't need any knowledge of R program. All data can be loaded from spreadsheet format. Optionally, you can run the program also from JUICE software (http://www.sci.muni.cz/botany/juice/) - in this case you need to have both JUICE and R installed on your computer. JUICE is a free program for editing vegetation data, developed by Lubomír Tichý from Masaryk University Brno, Czech Republic.

Running the program with data in spreadsheet format

Running the program from JUICE 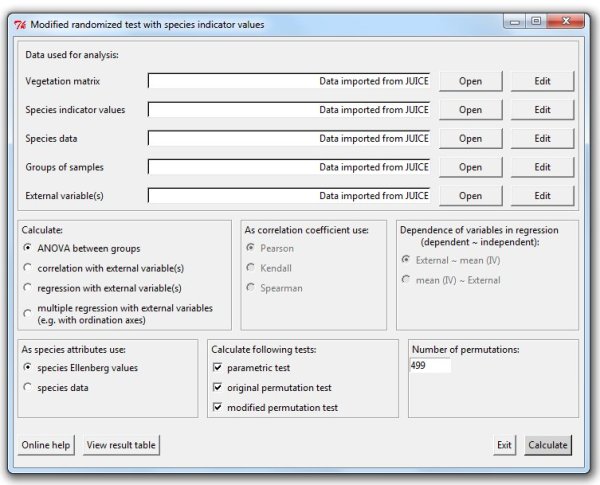 Use this function if you want to test the differences between mean EIVs for groups of samples, assembled together e.g. by cluster analysis. One-way ANOVA is calculated, returning p-values based on modified permutation test.

Calculates regression of mean EIVs with external variable, which is either derived from species composition (e.g. species richness of samples, scores of samples along ordination axes etc.) or is measured environmental variable. Regression can be calculated either with mean EIVs as dependent or independent variable, modifying the setting of Dependence of variables in regression (dependent ~ independent). Modified permutation test is based on comparing real F-value of the regression with null distribution of F-values generated by modified permutation of mean EIVs.

Forest vegetation plots, located in even distances along transects following the steep valley slopes of Vltava river valley (close to Zlatá Koruna, Czech Republic) and collected during 2001-2003 (Zelený & Chytrý 2007). Each transect started at the valley bottom and end up at the upper part of the valley slope. Plots are of the size 10×15 m. In each plot, all species of tree, shrub and herb layer were recorded and their abundance was estimated using 9-degree ordinal Braun-Blanquette scale (these values were consequently transformed into percentage). At each plot, various topographical and soil factors were measured or estimated - soil pH is reported here. The dataset contains 27 transects with alltogether 97 samples.

The zip file needs to be unzipped first and than the file with *.wct extension can be opened in JUICE (use File > Open in JUICE menu, to click on the icon of the file is not enough). Species Ellenberg indicator values are already initiated, i.e. they are assigned to species (you may check this in JUICE menu Indicator values > Initiation). The table is separated into 5 groups, resulting from cluster analysis (Ward algorithm and Euclidean distances).

Known bugs, which will be fixed in the next release

If something does not work

please write me (zeleny@sci.muni.cz), I will try to fix it. I really appreciate constructive feedback!